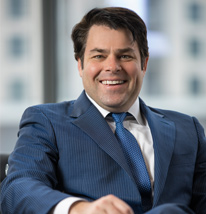 As Founder and CEO, Banks Bourne oversees all business operations and direct investment opportunities at Bourne Partners. He and the firm have been party to more than $10 billion of transactions in the pharmaceutical (“pharma”), pharma services and consumer healthcare sectors. Most recently Banks, the Bourne Team and other partners co-founded Covis Pharma S.à.r.l. in 2011, successfully helping build and eventually divest the majority of assets in 2015 for $1.2 billion. In late 2015, the firm established Phoenix Therapeutics, Inc., a joint venture with The Carlyle Group. Banks is also the founder of Tanner Pharma Group, a pharma services company dedicated to providing managed access, commercialization and clinical trials services to patients and partners in more than 100 countries.

While Banks has derived great satisfaction by offering focused advisory services to, and investing in pharma, healthcare, and consumer-oriented companies that need strategic and operational insights; he is even more gratified by knowing that his work has helped companies to improve the health and well-being of patients across the world.

In addition to his passion for golf, Banks enjoys traveling to new and interesting destinations and spending time with his wife and children. He also actively supports the Levine Children’s Hospital and Levine Cancer Institute, both part of Atrium Health (formerly known as Carolinas HealthCare System). He is co-founder of the Russell Guerin Melanoma Research Fund at Atrium Health. Banks is passionate about providing healthcare and specifically pharmaceuticals to less fortunate patients, as demonstrated by supporting The Bourne Foundation, The Max Foundation, Partners in Health and other non-profit organizations.